Working at the Olympics might seem like an impossible dream, but Maltese Swiss Hotel Management School (SHMS) alumni Nikhil Pandya, has had the privilege to work at three different Olympic Games. 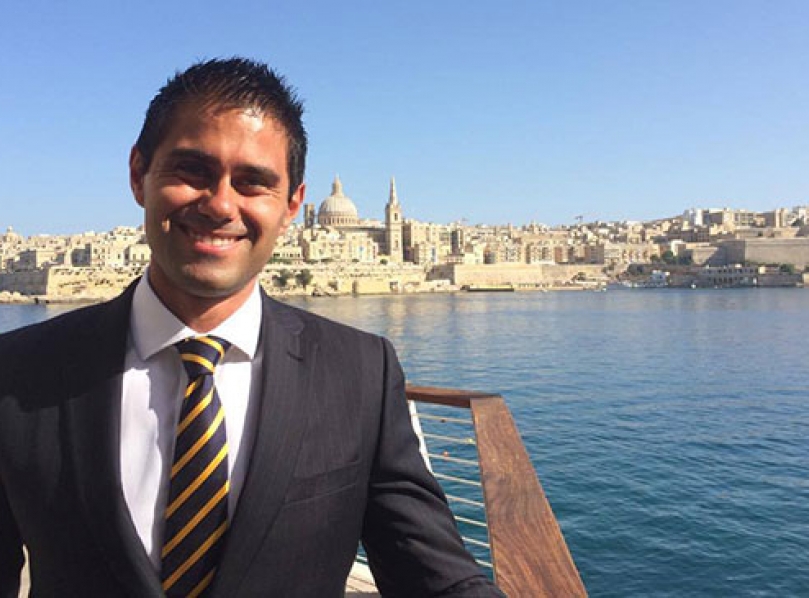 “I used to aspire to be a pilot until my grandfather took me to the Athens Olympics in 2004. Watching the Opening Ceremony and seeing hospitality in action right before my eyes, sparked my interest in event management.”

What was so special at the Olympics that made you decide to go into event management?
From the moment we landed in Athens, the volunteers warmly welcomed us and seeing their enthusiasm and commitment to ensure we were well taken care of made me feel very special. As my grandfather and I met and spoke to volunteers, I felt their passion really came through, and the satisfaction they received from making others feel comfortable.

“I guess that’s what event management is really about – bringing people together and seeing an event come to life as planned. It’s special when you can share these moments with a team of like-minded people who have worked tirelessly to make that moment happen.”

You’ve worked in various roles in three different Olympic Games – Beijing 2008, Vancouver 2010 and London 2012. How would you compare your experience at all three Games?
My role at the Beijing 2008 and London 2012 was quite similar in providing corporate hospitality to guests at the Games. At Beijing 2008, I did event and catering operations at one of the hospitality venues, whilst at London 2012, I managed all F&B related operations in multiple restaurants and venues. Vancouver 2010 was slightly different as I worked with the Slovak Representative House to promote the Slovak culture and cuisine at the Games. Whilst each role was different in terms of responsibilities and tasks, teamwork was always an essential criteria.

Working at the Olympics requires you to excel at teamwork within a short period of time. You have to get to know your colleagues quickly and learn to put differences aside to ensure the various events go on smoothly. The stories that you go home with and the friendships that you make at the Olympics are incomparable.

You had the opportunity to work with Chef Anton Mosimann’s team at Beijing 2008. What an experience that must have been!
It was indeed a great experience seeing how a project on paper evolved into a culinary presentation of eastern and western cuisine for guests from all around the world.

Till today I am in contact with some of Mr.Mosimann’s team such as Mr. Andrew Selvadurai who heads the Front of House operations at Mosimann’s Club in London. Shortly after the Games I was in London and was fortunate to have been able to get a complete tour of the restaurant. What an incredible venue - from the kitchen to every single private dining room, it was impeccable.

You’ve got to rub shoulders with some pretty influential people in the course of your work! Can you share with us some of the interesting personalities you’ve met?
Meeting Pele was probably one of the most exciting moments of my life! I managed to catch up with him by the stadium garage to take a picture with him. When I got to him and requested for a photo, he said “For you my friend, anytime!”  He’s such an icon in the footballing world yet so down to earth.

More recently, I came very close to meeting Queen Elizabeth when she opened the Commonwealth Heads of Government Meeting. Understandably though, security was very tight.

So what’s next for you?
I am currently back in Malta and am working with the logistics team that is responsible for The Presidency of the Council of the European Union till June 2017.  As for the future, I would like to continue working in event management.

The industry isn't always as glamorous as it is sometimes perceived to be. A lot of hard work, long-hours and administrative work is necessary. It's also fast-paced and can get hectic at times. Nonetheless, I find it very dynamic and suited to my personality. Working in different environments, getting to know different cultures and meeting people from all walks of life excites me and I can’t wait to see what the future holds.