After completing her course at the Culinary Arts Academy Switzerland, former engineer Akshay Ravindra Babu found herself advocating the use of ethically sourced India cocoa. 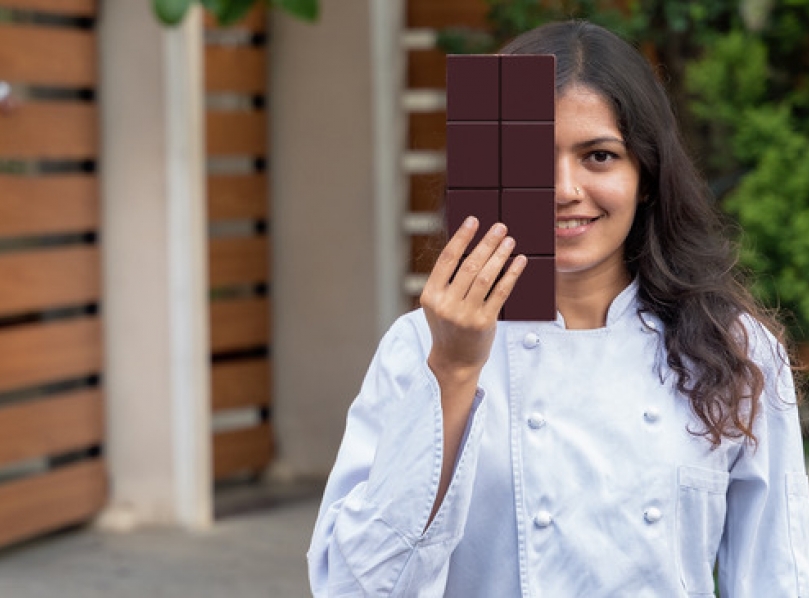 It almost sounds like the synopsis from a movie. After two decades of studying and training as an engineer, a young woman decides to quit her IT job to pursue her passion in pastry and confectionery. But this is exactly what Akshaya Ravindra Babu did.

Biotech engineering is a core research field unlike many other branches in engineering and I was in the process of figuring out what to research. That’s when pastry chose me, and one short certification later, I knew what I wanted to do for the rest of my life.

Today, Akshaya’s company, Sihi Chocolaterie, manufactures ethically produced couverture chocolate and cocoa. Her customers are mainly chocolatiers, hotels, pastry chefs and bakers. She travels to over 40 regions in the states of Karnataka, Kerala, Tamil Nadu and Andhra Pradesh to source for India cocoa

The move from engineering to chocolate-making wasn’t quite easy for Akshaya as where she comes from, choosing a less travelled route is a big no-no considering the opportunities were limited.

She knew that she had to acquire knowledge from the very best, so she enrolled at Culinary Arts Academy Switzerland to learn Swiss Pastry and Chocolate Arts.

These days, people have whipping cream accessible to them. But to make it stable for a long period of time, it comes with a bit of education. Having that education gave me a faster approach to things. 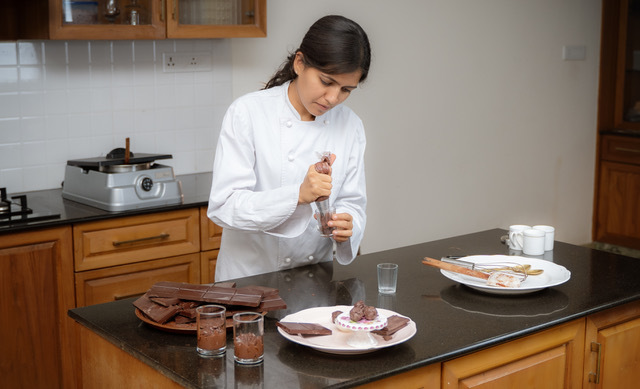 After graduation, she scored an internship at The Alpina Gstaad to work in the pastry section under the tutelage of the best chefs in the world. Upon returning to India, Akshaya started to consult for various brands and restaurants to develop recipes. It was during her consulting work that she realised that there was a lack of good quality couverture chocolate in India.

It was 2016 and there was a period of time when a lot of imports were halted because of changes in trade regulations. At that time, the import of raw materials for couverture chocolate was halted.

I remember thinking, ‘Our country grows cocoa, so why are we not utilising that for our pastries and confectionery?

She met a farmer who approached her to lament about getting a low price for his cocoa. It was as low as one-third of the international market price. It was then her idea to source for India cocoa materialised. India grows 60 thousand acres of cocoa and one of Akshaya’s missions is to promote India cocoa so that it doesn’t become extinct.

Sihi Chocolaterie was established with a mix of fear for chocolate extinction and the need for good quality couverture.

Another mission of hers is to consciously help the market consume chocolate beyond the level of guilty indulgence into a healthy consumption. She elaborates that chocolate was once used as medicine and she wants to return to the practice of using the originality and purity of chocolate that was once consumed.

Perhaps it comes as a surprise that this chocolate advocate doesn’t have much of a sweet tooth. Her chocolaterie focuses on producing dark chocolate with very little sugar content. In fact, Akshaya understands the importance of good quality ingredients and how they can make or break a recipe.

We are super thankful to our farmers for their efforts in producing ecologically and nutritionally rich produce. We would also like to thank chocolatiers and bakers across India for supporting us. This has positively impacted the lives of over 350 farmers living in the most remote regions of the western ghats.

Congratulations Akshaya and we wish you all the best in your journey!